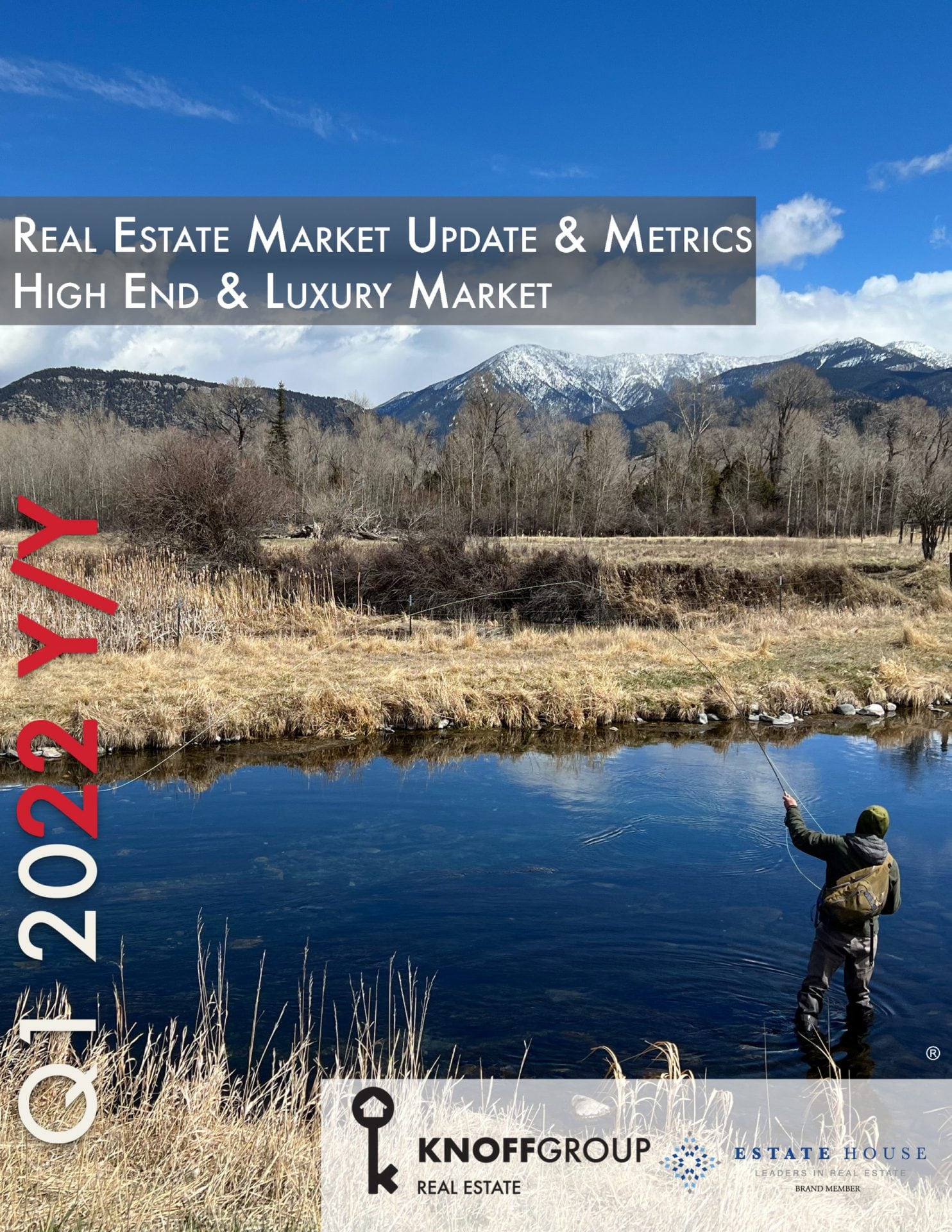 Year over year Q1 2022 single family home median sales prices continued to leap from Q1 2021 in all areas of the market. City of Bozeman median sales price accelerated by the smallest margin at 19%. Big Sky jumped 32%. Belgrade jumped 49%. Greater Bozeman area jumped 68% and Livingston jumped $46% for median sales price year over year. Remarkably, the difference in 2022 median sales price over 2020 increased between 62-77% in these same areas (**Note:  Q1 2020 was not affected by initial COVID-19 shock- (Q2 2020 was most heavily affected).

Days on market were a mixed bag in Q1 2022, with most areas either staying the same or adding up to 25% more days on market. Likely this is due to accelerating pricing and some pricing overshooting market capacity. The one exception was greater Bozeman which had a 16% reduction of number of days on market.

Inventory has continued to be an issue as many sellers struggle to secure replacement property or who are not encouraged by changing mortgage rates. Number of units sold were at the lowest they’ve been in the last 3 years in Q1 2022 – down 66% in Bozeman, down 18% in greater Bozeman, down 5% in Belgrade, down 23% in Big Sky, and down 22% in Livingston. Manhattan saw a modest increase in number of units sold in Q1 2022, with recently added new construction properties filling the void.

List to sales price ratios, which measure the difference between the average list price and average sales prices on properties and thus is an indicator on how competitive the market is, showed little to no discounting in most areas of the market. The ratios are indicative of especially strong seller’s markets in City of Bozeman, Belgrade and Livingston and light discounting occurring in greater Bozeman, Big Sky and Manhattan off list prices.

Condo and Townhome median sales prices continue to soar in all tracked areas of the southwest Montana real estate market in Q1 2022 over the previousyear.  Median sales prices were up 38% year over year in City of Bozeman, up 19% in greater Bozeman, up 56% in Belgrade, up a whopping 93% in Big Sky and up 47% in Livingston.

Days on market were less by 10-42% in most areas of the market with the exception of City of Bozeman which increased 33%.

Inventory in all areas, except Livingston which had a bit of a building spree, was down anywhere between 8-30%.

List to sales price ratios show essentially no discounting in any of the areas tracked with the exception of Big Sky which held at a tiny 1% discount rate. Most areas are posting an above list price average for sales prices.

Days on market are at an all-time low in most areas – having dropped more than 100% from 2020 for most areas tracked.

Number of land sales are down in all areas significantly, with the exception of City of Bozeman which had more movement than 2021 but 33% less than 2020. All other areas were off 55-60% from previous years.

List to sales price ratios show some discounting in all areas, but significantly less than just two years ago. Land typically has a little room for negotiation but there has been less than 1% discounting in Big Sky, 5.5% in Belgrade, 2.5% in greater Bozeman and 5.5% in City of Bozeman on average.

Number of luxury single family homes sold (homes priced over $1.5M) showed an uptick in greater Bozeman – up 57% from 2021, essentially flat in City of Bozeman and down in Big Sky as available units continue to be an issue. Volume was up significantly in greater Bozeman (123%) and slightly in Big Sky (17%) – City of Bozeman saw a 26% downward trend as number of properties sold stayed mostly flat year over year.

Big Sky is the only area registering sales of condos and townhomes at the luxury level (over $1.5M) for Q1 2022. Number of these units sold was up 13% year over year and volume was up 62% reflecting the enormous strides that some newly offered properties are taking on list price.