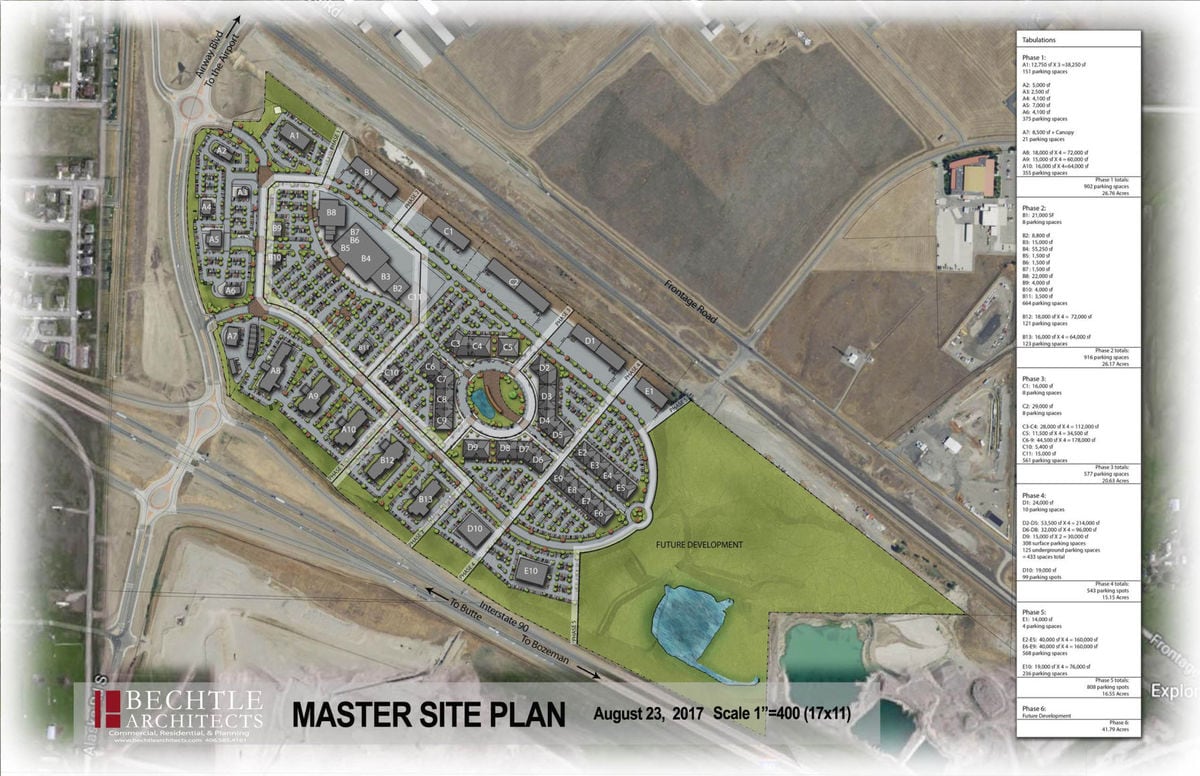 This is a pretty awesome project for Belgrade and excited to see where it goes – but not impressed with some of the city council’s feedback – seriously, your only comment is that Belgrade should be in the name?

Developers for the Yellowstone Airport Plaza are actively seeking input for a site plan, which would construct retail spaces and housing units on empty ground between Interstate 90 and Frontage Road on Airway Boulevard.

Scott Bechtle, architect representing Charter Realty and Development, presented a visual of the site plan at the Belgrade City Council meeting on Monday. The developers pitched their plan to the Belgrade City-County Planning Board on Sept. 5, asking for the group’s input on preliminary plans.

Jason Karp, Belgrade city planner, said the discussion was not looking for any formal approvals, rather to keep the council in the loop of information.

“We just want to make sure that the council is comfortable with how the development is proceeding,” Karp said.

Bechtle said that the realty company saw potential of a plaza-like development with Belgrade’s growth and the airport nearby. But, the developers did not want to proceed without receiving sufficient comment and input from the city council.

“You’re the leaders of the community and we’d love to see where you feel this key property might help Belgrade in the future,” Bechtle said.

The developers wanted to pull together a plan that is flexible and that would allow the property to grow with the needs of the Belgrade community, he said. The presentations, Bechtle said, would help address concerns the council may have before plans were chiseled into people’s minds.

“We found that, usually if you start with a picture, people can relate to a picture and it generates conversation and input,” Bechtle said. “And we believe that the best design comes from collaboration.”

“We still need to work with your public works department to make sure that we meet fire, capacity, flow and all the other things that we know we’ll have to meet both for the city of Belgrade and for the Department of Environmental Quality,” Ekstrom said.

Council member Brad Cooper suggested that the name should somehow incorporate the city’s name into the plaza’s title. He said that was the only issue that he had with the development.

“Somewhere people should realize that Belgrade is a part of that name, it shouldn’t just be airport,” Cooper said. “Belgrade should be in there. I have issue with that.”

Russell Nelson, mayor of Belgrade, joked that Cooper’s gripe with the name probably stemmed from the airports name, “’Bozeman Yellowstone International Airport,’ in Belgrade,” he added.

“My perspective is that it’s nice to see someone interested in developing that property,” Nelson said.

Ted Barkley, Belgrade city manager, said that since the plans were presented at a planning board meeting, he’s heard concerns for traffic in the area after the plan is built out. Developers said that they are in the process of conducting a traffic impact study that will be presented when the plan is ready for a preliminary approval.