This is a big win for the Belgrade community and for the surrounding area.

Firefighters at Central Valley Fire District’s Station 1 have a new home, and the public is invited to celebrate its grand opening and tour the facility on Saturday.

After three years of planning and construction, the district’s new headquarters on Wings Way near the airport is operational. The $8 million station, which lacks nothing in form or function aside from a fire pole, replaces the Fire District’s former home on Main Street – a 63-year-old building erected by volunteers before there were strict codes. The 1956 structure was not only cramped, dangerous, and obsolete, but literally crumbling, according to Fire Chief Ron Lindroth.

Less than 48 hours after Saturday’s 4.0 earthquake that rattled nearby Manhattan, Lindroth noted that in addition to the old station being “antiquated and not meeting our needs,” that old structure likely “would have collapsed” in a more sizable quake.

The new station, by contrast, was designed not only to withstand a seismic event, but to serve for the next 80 to 100 years as a bulwark and central command center should an earthquake or other disaster such as a flood, wildfire, pandemic or railroad hazardous materials mishap create an emergency in the district’s 200-square mile service area.

“The community is providing a fabulous facility through their support so that we can turn around and support them,” Lindroth said.

The new 20,000-square foot station boasts not only the first decontamination facility of its kind in the nation and numerous amenities designed to enable the quickest possible emergency response, but also comfortable accommodations for firefighters who will spend a third of their lives there.

“This particular facility was designed with several points in mind,” Lindroth said.

The “first and foremost” priority was enabling quick emergency response. The

station’s location on the Bozeman Yellowstone International Airport campus allows personnel to respond quickly via major arterial to emergencies to the north, south, east or west of the station. Lindroth explained that passing trains, school zones and other impediments created access challenges at the old station, but the new site offers four unobstructed accesses to Belgrade, as well as an easy passage under the railroad tracks and close proximity to Interstate 90.

Numerous other amenities have been built into the new station to speed response time. The heavy, metal-frame doors, behind which the station’s emergency vehicles sit ready to roll, open in merely four seconds – much faster than the 10 to 15 seconds required to open an overhead door.

“This design is to get firefighters out to the public quickly,” Lindroth said. “Wherever we can save seconds , we do.”

A modern alerting system will transmit information about developing incidents directly to the station without relying on multiple radio communications from the dispatch center. Scheduled to come online next month, it will save critical time, Lindroth said. An electronic voice will announce bulletins, that simultaneously will be flashed to television screens in the building, along with a map and written details. Once implemented, Lindroth said officials anticipate that the system will save up to a minute of dispatch time.

Also prioritized during design was concern for the emergency personnel – not just their comfort, but also their safety.

“If you’re going to spend as much of your life here as they do, we might as well have a good environment,” Lindroth said. 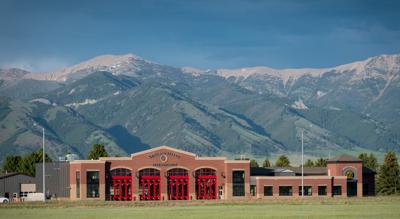