The city has held off for 12 years on instituting the full recommended total in order to spur development. Belgrade is the ‘new frontier’ for new construction – it will be interesting to see how this affects pricing in an already accelerating market 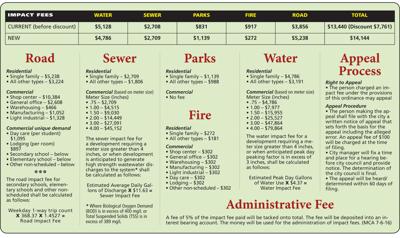 In two months’ time, developers will be paying almost double the impact fees for a residential home in Belgrade after a 4-1 vote Monday by the Belgrade City Council.

Builders told the council the proposal would price working families out of a house, but city officials and the council questioned the sentiment and said growth needs to “pay its own way” without having too much effect on current residents. In turn, the council put in place 100% of the recommended impact fee amount of $14,144 for a residential home.

The current price is $7,761, which is 55% of the recommended total of $13,440. Impact fees were put in place in 2007. The council opted to discount the fee, mirroring other municipality decisions in the Gallatin Valley.

It was new territory at that time, longtime Councilwoman Anne Koentopp said. In hindsight, the council could have taken another tack.

“I wish we had of phased them in back then, but we didn’t,” she said.

Impact fees, authorized by state law, are paid when a building permit is issued and goes toward infrastructure improvements for water, sewer, parks, fire and roads. The improvements must be outlined on a capital improvements list composed through an engineering study. The fees cannot be used towards regular maintenance needs.

Nine people from the building industry commented Monday with all

the testimony against raising the fee in one form or another. Some said they understood the need for impact fees but asked for another way to implement the amount.

“Jumping $7,000 in one lump sum is a very high cost to bear at one time,” Belgrade builder Daniel Francisco told the council. He suggested incremental hikes or extending the time when the new fees will be in place. Others shared that idea.

In the end, the council listened to some builders who were currently in the process of bidding jobs. The new fee, contractors said, would skew the numbers and potentially jeopardize funding.

The council voted 4-1 to extend the start date for the new fees by sixty days from Monday, May 20.

Councilman Brad Cooper was the lone vote against the hike. Cooper proposed a 20% increase.

But doing so, City Manager Ted Barkley said, would affect the city’s finances for the new sewer and future water projects, which in turn would require a reevaluation of water and sewer rates that were recently increased. A steep reduction would also require the city to remove other projects from the capital improvements list.

Throughout the meeting Barkley stuck to the mantra that “growth needs to pay its own way” and impact fees are necessary to keep the burden of growth off current residents.

“It’s how you want the community to look and function and who has to pay,” he said.